Youtube is a great historical resource! I have been reading Hazel Rowley's Franklin and Eleanor: an extraordinary marriage (Melbourne University Press, 2011) and just idly flicked in a search to Youtube as one does. Yes, there is Eleanor at the Human Rights Declaration at United Nations and also masses of other stuff from the FDR collection including family movies as well as more notable speeches and occasions. 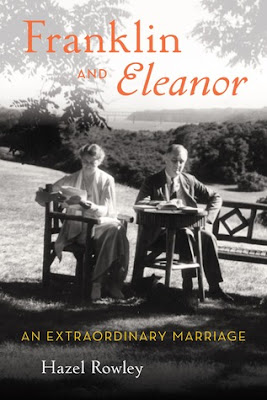 Eleanor was an amazing woman and I have read other stuff on her and seen at least one documentary. This book by Hazel Rowley is a really enjoyable read. It's well-researched and well-written and has some great photographs. As she focuses on the relationship between Eleanor and Franklin the part of Eleanor's life that is mainly featured is that between her marriage in 1905 and Franklin's death in 1945, though the context of before and after is well set. I got a bit confused with all the relatives in the beginning and think that perhaps a family tree would have made a good addition to the book! But that's a minor quibble!
Posted by Polyxena at 2:47 PM