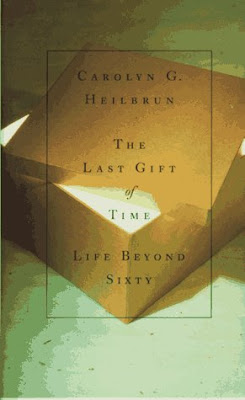 I first started reading Carolyn Heilbrun's writing decades ago under her pseudonym of Amanda Cross. Her crime novels about a feisty academic feminist, Kate Fansler, really stood out for me among other early feminist crime fiction which was very issues based and not necessarily good writing or attractive publishing. Cross' novels, on the other hand, were well-written reflective pieces with a good story line and, at that, usually a storyline set in academic circumstances which I understood.

In 1970 an investigative journalist discovered who was the real person behind Amanda Cross and I came to know the writing of Carolyn Heilbrun herself, such as the classic Writing a woman's life. Heilbrun, atheist, feminist and a woman with strong views, had decided that she did not want to live beyond the term of a natural life i.e. 70, the Biblical three score years and ten though as an atheist the Bible was not a construct that ruled her life. The Last gift of time: life beyond sixty was written when she was approaching 70 and looking back on the last ten years of her life. She decided then that the time was not right but when she was 77 ended her life at her own time and in her own place and space, in a room of her own indeed.

Recently author, Paddy Leigh Fermor, died at 96. He was still living part of the year in the Mani and part in England. He is reputed to have still been writing and revising. Carolyn Heilbrun decided at age 77 in full possession of her faculties to choose her own time of ending her life. My friend's father, John, who is 90 and has dementia was a member of the Euthanasia Society but now he is in a high care dementia ward and doesn't know what euthanasia means. There are many pathways. But I really recommend that people read Carolyn Heilbrun and savour her prose.
Posted by Polyxena at 2:41 PM