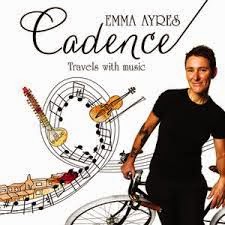 This post was written by Carol from Hawthorn Library.
Emma Ayres is a well-known radio presenter on ABC Classic FM.  Her book Cadence is about her epic solo journey from England to Hong Kong on her trusty bicycle Vita.  She also took along a small violin which she played to many people along the route.  We were lucky enough to have this talk punctuated with her viola playing, a clever way to illustrate her musical career, the importance of music in her life and moments that coloured her trip.

Growing up in England, she came from a family with very limited means so found riding a bike the best way to get around.  By 11 years old she was able to manage 40kms without trouble.  Despite this early experience, she was unfit when she embarked upon her project; there were vivid descriptions of physical pain and discomfort in early stages of her travels.

Why did she choose UK to Hong Kong?  She was familiar with Hong Kong having worked as a ‘rank and file’ member of the Hong Kong Philharmonic Orchestra for several years.  She also used the ride to raise funds for a music therapy charity there.

She had the audience laughing loudly with her explanation of incidents and impressions along the way.  She thought there was ‘nothing remarkable’ about riding through Europe but the trip stepped up a notch in Iran which presented different problems;  nevertheless, she remembers it as fun.  Pakistan was much more difficult; she said it was a turning point in her life where she overcame considerable fear and survived scary encounters with police.

Finishing this project gave Emma immense satisfaction but also a sense of loss.  It was an ‘ending’ and she was worried she would ‘fall over’.  It took some time to get back into ordinary life.

The opportunity to work in radio (which she took to immediately) has given her a rewarding career and is something she clearly loves.

There was a hint of a new long bicycle adventure in Australia which will also highlight the serious need to support music education.

The idea of freedom is very important to her and she believes there is freedom in riding in the countryside and freedom ‘inwards’ through music.

Emma Ayres has a sharp mind, a wonderful wit and is very entertaining. She is generous, hilarious, warm.  She took us on an uplifting, unusual and challenging journey;  a journey that also gave a glimpse into a very interesting life.

Publisher’s note:  In her provocative, intelligent, surprising and funny memoir, Emma cycles her way from England to Hong Kong with a violin she calls Aurelia strapped to her back. But it is also a journey through the keys, and the music that inspired, shaped and provided refuge for Emma throughout her travels with music.
Posted by Unknown at 11:07 AM