Evie Wyld wins the Miles Franklin award with All the birds, singing. 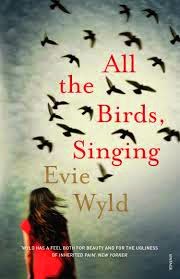 Congratulations to Evie Wyld, 2014 Miles Franklin award winner for
All the birds, singing

The story starts with Jake Whyte, a tough as guts female Australian sheep farmer on a remote British island battling the elements with her dog, called Dog. She has a small flock of sheep and through them we discover that her tough exterior has a fragile, tender centre. Every now and then, one of the sheep is brutally killed and it disturbs Jake, perhaps more than it would most tough sheep farmers. What is out there in the foreign British woods that could do a thing like that to a sheep? A fox? A man? One of those wild cats escaped from a zoo that some people insist they see from time to time? Jake sees all of this as a threat to her solitude which is the only thing more important to her than her sheep and her dog.

The alternate chapters in the book follow another much younger woman, cutting her teeth on a sheep farm in remote Australia. She is the only woman amongst some very hardened men. She is a guarded and tense young woman but finds comfort in Greg, a fellow shearer. We follow her story backwards in time, which can be a little confusing but is a revelation in story writing when the reader adapts to Wyld's cadence. When Clare, an older man on the sheep farm, discovers her secret past everything is destined to unravel. We are driven even further back in time to the girl's past; a haunting Hitchcockian nightmare steeped in the colour of violent Australian masculinity and mateship.

With a spinning sense of geography and place - so Australian and yet so foreign - Wyld navigates themes of sexuality, displacement, resilience and even redemption. Although far from home Jake never lets go of the mirror that holds Australia in its reflection. This novel is a brooding comment on many contemporary themes but intelligently and subtly written to allow the story to hold.