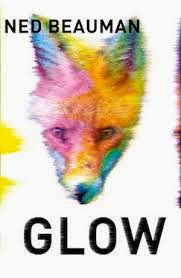 A hip, modern thriller with an unlikely hero and a conspiracy fetish, Glow is the latest work from Granta prize winner Ned Beauman.  It centres on Raf, a young Londoner with a strange sleep disorder and a passion for trying new drugs.  Raf meets Cherish, a beautiful Burmese girl and becomes entwined in her complicated story.  A powerful multinational mining company, the strange behaviour of foxes and silent white vans abducting people off the streets all point to something very wrong going on in London.  Glow is a conspiracy thriller meets drug story meets romance - reinvented for a new generation.

The quick moving plot is deftly handled but it is Beauman's killer writing style that wins again in Glow.  He is sharp, intelligent but also witty and playful, never taking anything too seriously.

Ned Beauman is just 29 years old, lives in London and Glow is his third novel.  His book The teleportation accident was shortlisted for the Man Booker award and he has been named one of Granta's Best of Young British Novelists.