Book review - Last of the Vostyachs

Last of the vostyachs by Diego Marani


This is a short book best read in one sitting by the fire on a cold afternoon with a lovely cup of tea. Well, that's how I did it anyway. 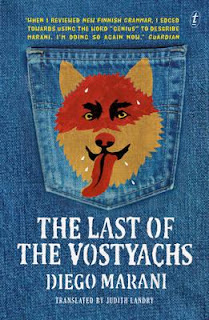 Ivan is the last of his tribe. His father died in his arms in a Russian slave camp which Ivan manages to escape. The problem is that he has no idea where he is, where he should go or what he should do. His people were ancient shamans and Ivan feels a desperate need to return to his true life but that seems to have closed on him. Most importantly for the story, he is last person on earth to speak his language. He is a relic of an age that has made way for modernity and cultural assimilation.

Olga, a young ambitious academic linguist 'discovers Ivan. She learns his language and believes that it is a very old language and that more controversially, it is related to Finnish. Finnish itself if not related to other languages apart from Hungarian and Estonian. Ivan's language creates a bridge between Finnish and Inuit-Olet languages. Deigo writes his love of lanuages in detail and is sometimes a bit hard to understand but you do understand the concept here. The controversy is that most academics believe that Finnish is somehow pure. However, Ivan's existence suggests that is related to languages in the North American region.

In Olga's excitement she tell Jaarmo, her fellow linguist colleague who is now a professor. If you like characters you love to hate, then Jaarmo is for you. He is a self-important academic who now sees that his theories of language origin will be seriously in doubt. He cheats mercilessly on his wife who is going through something of a midlife crisis taking her anger for Jaarmo out on the dog he left behind. Olga's mistake is to trust Jaarmo. This sets in motion some disastrous events which will leave several people dead and Ivan's future in serious doubt.

The book is sad and beautiful at the same time. Ivan is wild and terrifying but simultaneously tender and endearing. There is a spark of humour that emerges only occasionally but when it does it is surprising and shines out in this somewhat sobering story.
Posted by Roslyn Irons at 5:00 PM