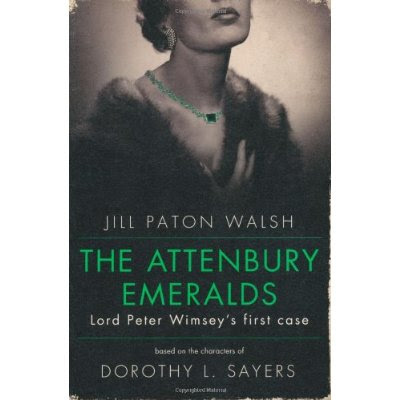 I got on a real roll reading Dorothy Sayers crime fiction and, of course, once I had finished all her novels I wanted to read more about Peter Wimsey. That left me with two options: to read the ones written by Jill Paton Walsh and to search out the various short stories written by Dorothy L Sayers about him. So I have been doing both.

Jill Paton Walsh in 1998 published a completed form of Dorothy Sayers last but unfinished Wimsey novel, Thrones, Dominations. After its success, she followed up with two other Wimsey titles A Presumption of Death in 2002 and The Attenbury Emeralds in 2010. Both of the latter titles were based on ideas or hints of cases from DLS who refers to the Attenbury Emeralds as Wimsey's first case after the war and who wrote a series of letters to and from various members of the Wimsey family on which A Presumption of Death is based. In fact A Presumption of Death is identified as co-authored by the two writers as is Thrones, Dominations.

I had read Thrones, Dominations previously and read it again at the end of my recent Sayers burst. Coming as it did at the end of weeks of reading DLS's prose and allusions I really didn't find it as good (though certainly not bad). I had decided I wasn't going to read Jill Paton Walsh's other Wimsey titles but they came up in conversation with some friends, one of whom said the next two were very good. So I did read them and I have enjoyed both of them particularly The Attenbury Emeralds. But, they just are not Sayers. One can read her books on so many levels and the prose is just filled with literary and other allusions including, I am sure, many I don't get. But if you like the Wimsey stories do read the Jill Paton Walsh ones bearing in mind that this is another writer who writes well but differently.
Posted by Polyxena at 2:25 PM