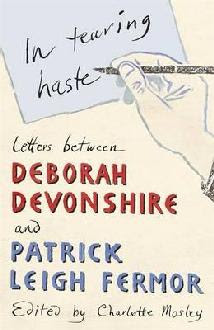 When Patrick Leigh Fermor died recently, I went to the Boroondara library catalogue to hunt out my Fermor favourites. Much to my delight I discovered a book I didn't know. Edited by Charlotte Mosley, In tearing haste is a collection of letters between Patrick Leigh Fermor and Deborah Devonshire. The correspondence which is two-sided (i.e. I mean there are letters from both of them) spans the period from 1954 to 2008. It is illustrated by a great series of photos of them and lots of other familiar bods and ends in a poignant one taken in 2008 at Edensor with both of them, backs to the camera, heading away from the viewer.

I have just been dipping into it since I brought it home but think it deserves a solid cover-to-cover read now!
Posted by Polyxena at 2:38 PM