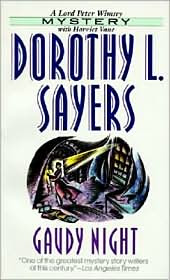 During the last month or so I have had a very yucky run of being poorly. That was the down side but the up side of this was that I was only in the mood for very recreational reading. And well let's face it for me that really means crime fiction. But I didn't want some new titles. I needed some comfortable old rereads that would delight me by their prose and give me the thrill of the chase when sometimes I really knew the outcome.

So I decided to read a Dorothy L Sayers or two. In fact, it ended up being not stopping at two but encompassing her whole corpus of crime novels as well as the one she left partly written, Thrones, Dominations, which was completed by Jill Paton Walsh. I decided I wanted to read them in order so I searched out a chronology first off and found one here (along with a lot of other information). This was a list in internal chronology rather than by year of publication. Some of these I had reread on a number of occasions but there were others that I hadn't read for decades.

So in due course, I read: Whose body?, Clouds of Witness, Unnatural Death, The Unpleasantness at the Bellona Club, Strong Poison, The Documents in the Case, The Nine Tailors, The Five Red Herrings, Have his Carcase, Murder must Advertise, Gaudy Night, Busman's Honeymoon, and the afore-mentioned Thrones, Dominations. I was amused to see as I clocked these up on Goodreads which then broadcast my reading to Twitter and Facebook how I seemed to be starting a trend amongst my followers! I hope they had as much please as I did :)

What a pleasure were they all! I love her prose and her literary allusions and, of course, her plots. They are all really fabulous but Nine Tailors and Gaudy Night are still my definite favourites! Some things don't change in decades. I didn't really like Thrones, Dominations as much as the real DLS but I was encouraged last weekend to start reading the other couple of Wimsey books that Jill Paton Walsh wrote as the person recommending them said they were good. I am currently reading A Presumption of Death which is also based partly on some extant DLS stuff. So I will be reporting back further on these titles.
Posted by Polyxena at 8:24 AM