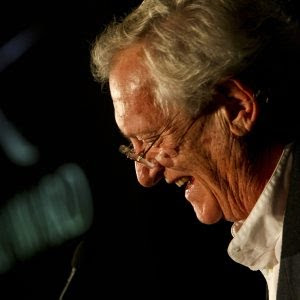 Congratulations to Peter Temple who was awarded the Miles Franklin Literary Award for 2010. Announced at an award dinner in Sydney on 22 June 2010, Peter Temple was presented this year's prize of $42,000 for his novel Truth.

Temple who was born in South Africa now lives in Ballarat.

It is the first time a crime novel has woth the prestigious award.

At the close of a long day, Inspector Stephen Villani stands in the bathroom of a luxury apartment high above the city. In the glass bath, a young woman lies dead, a panic button within reach.

So begins Truth, the sequel to Peter Temple’s bestselling masterpiece, The Broken Shore, winner of the Duncan Lawrie Dagger for Best Crime Novel.

Villani’s life is his work. It is his identity, his calling, his touchstone. But now, over a few sweltering summer days, as fires burn across the state and his superiors and colleagues scheme and jostle, he finds all the certainties of his life are crumbling.

Truth is a novel about a man, a family, a city. It is about violence, murder, love, corruption, honour and deceit. And it is about truth.

On behalf of the judging panel, Morag Fraser commented "It was a controversial and challenging shortlist, accomplished and diverse in many ways that made the judges' task very difficult. Each novel offered quite a distinct and compelling fictional journey".


Temple was interviewed on radio this morning about the award. Click here to read a transcript of the interview.